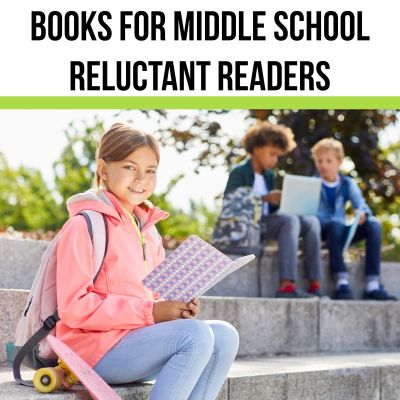 It can be a challenge to find books for middle school reluctant readers. Before you provide students with book suggestions – strive to find out what is causing their reluctance to read. Some possible reasons could be:

If students are struggling with the mechanics of reading then seek out the support of your school’s Special Education department. If students can read, but choose not to then try to create positive reading experiences for them.

Stargirl (Stargirl Series)
Stargirl by Jerry Spinelli: When a new girl arrives at Mica High, she becomes the centre of attention. Her school spirit, good looks, and charming personality are a hit with her peers, until one day they turn on her. She becomes hated by her peers for being herself. Stargirl is faced with the decision to remain true to herself or conform to the status quo.

The Wishing Spell (The Land of Stories, 1)

Remarkable Journey of Coyote Sunrise
The Remarkable Journey of Coyote Sunrise by Dan Gemeinhart
When Coyote hears that the park in her old neighborhood is going to be torn down, she knows she must get her dad to drive across the country to save the memory box she buried there with her late mom and sisters. But she has to do it without him realizing her plan. Along the way they meet a diverse array of people, who Coyote realizes she can call friends.

The Running Dream (Schneider Family Book Award – Teen Book Winner)
The Running Dream by Wendelin Van Draanen
Jessica loses her leg in a car accident and is told she won’t run again. As she is getting on with her life she becomes friends with a girl she once ignored.

Warriors Box Set: Volumes 1 to 6: The Complete First Series (Warriors: The Prophecies Begin)
Warriors Series by Erin Hunter
The Warriors Series follows clans of feral cats who clash with each other, and their adventures and experiences. This fantasy series has several spin-offs, all of which have complex plotlines and character development.

Warriors Box Set: Volumes 1 to 3: Into the Wild, Fire and Ice, Forest of Secrets (Warriors: The Prophecies Begin)

Among the Hidden (Shadow Children 1)
Among the Hidden by Margaret Peterson Haddix
Luke is a “shadow child” – he is not allowed to exist. It is outlawed by the Population Police to have this many children. He must stay hidden in his house or risk being exposed. One day he meets a girl who also lives in the shadows. Together they decide to take a risk which could have dangerous consequences.

Box of Shocks
Box of Shocks by Chris McMahen
Oliver loves to do crazy things, like jump off bridges and run from killer dogs. But Oliver’s parents don’t know about his dangerous stunts, so he fills a box with souvenirs, hoping they won’t find it.

Drama
Drama by Raina Telgemeir
Callie loves drama but doesn’t sing. So she’s the set designer for the drama department. She is determined to produce a Broadway set on a school budget all while dealing with middle school drama.

Fish in a Tree
Fish in a Tree by Linda Mullaly Hunt
Ally Nickerson is a fabulous and relatable protagonist that middle school students will enjoy getting to know. As soon as the reader opens the book they are thrown into the middle of Ally’s story and her trouble at school. She immediately gets sent to the principal’s office and we get a glimpse into Ally’s academic struggles. Ally’s school difficulties throughout the novel help the reader build empathy towards Ally.

Guts
Guts by Raina Telgemeir
Raina experiences a sore stomach that won’t go away. Because her mom has it too, everyone thinks it’s just a bug. But when Raina gets an upset stomach every time she thinks about school, relationships, and anything else upsetting, she realizes there’s more to it.

Insignificant Events in the Life of a Cactus (Volume 1)
Insignificant Events in the Life of a Cactus by Dusti Bowling
Aven Green loves to make up wild stories about how she lost her arms, not that she was born without them. Her parents move them to Arizona to run an old western theme park and Aven knows she will have to keep answering the question over and over again. She isn’t looking forward to her new life in Arizona, but ends up meeting some friends with their own disabilities and together they solve a mystery.

Awkward (Berrybrook Middle School, 1)
Awkward by Svetlana Chmakova
Penelope Torres is starting middle school and knows she has to follow the social rules in order to not get picked on. Unfortunately, she gets noticed by the mean kids the first day of school. She tries to fit in but realizes she has to break the rules in order to survive!

I hope your students enjoy these books for middle school reluctant readers.

Subscribe to get engaging lesson ideas and special subscriber only bonus lessons like our Rant Writing Unit sent directly to your email address.

Success! Now check your email to confirm your subscription.