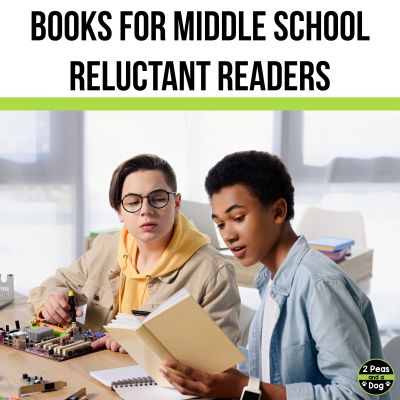 It can be a challenge to find engaging books for middle school reluctant readers. This blog post provides a list of possible novels that will capture your students’ attention and encourage them to keep reading.

Keeper of the Lost Cities (1)
Sophie has a secret- she can read minds. But she can’t tell anyone about it, until she meets Fitz. He shows her a place where she thinks she can finally be herself- until she realizes that she’s not the only one keeping a secret, and must fight for her life.

La Linea: A Novel
La Linea is the heartbreaking story of a boy who migrates to America from Mexico in search of a better life. Only 15, Miguel endures the hardships of crossing the border into America, not realizing that his younger sister has followed him. How can he keep her safe on this perilous journey?

Lumberjanes Vol. 1: Beware The Kitten Holy (1)
5 best friends team up at summer camp in this comic series to fight supernatural beings, survive camp, and experience life. They are there for each other like only best friends can be.

Michael Vey: The Prisoner of Cell 25 (Book 1)
Most of the students at Meridian High School think fourteen-year-old Michael Vey is just the kid with Tourette’s, they don’t know that he has electric powers. Michael believes he is alone in his powers until he finds out a cheerleader named Taylor has the same powers. Michael, Taylor and a friend set out to find out how they came to have these powers and also find a group that wants to control these unique teens and the world through their powers.

Mighty Jack (Mighty Jack, 1)
Jack hates summer. He might be the only kid, but it’s because he can’t have any fun- he has to babysit his autistic sister, Maddy. Maddy doesn’t talk, but one day she tells Jack to trade his mom’s car for a packet of seeds. It might be the best thing Jack has ever done.

Monster: A Graphic Novel
This beautiful graphic novel is adapted from Monster by Walter Dean Myers. Steve Harmon sits on trial for murder. To cope, he thinks of his trial and his time in the detention center as a movie that he is producing, directing, and acting in.

One for the Murphys
Carley is sent to live with the Murphys as a foster child and is surprised by stable family life. Carley tries to resist the family, but eventually they show her how to belong. When Carley’s mother wants her back, she needs to decide where she will live.

Orbiting Jupiter
Joseph is only thirteen when he becomes a father, but he has never seen his daughter. He is sent to a detention center and is later sent to a foster family who live on a farm in Maine, where he meets Jack. Jack tells the story of troubled Joseph and his drive to find his daughter.

Out of My Mind
Eleven-year-old Melody cannot walk or talk, but she has a photographic memory and can remember everything. It is believed she is not capable of learning, but unknown to everyone, she is the smartest kid in school. Melody is determined to be heard and with the help of a machine is able to start communicating with others.

Restart
Chase Ambrose falls off a roof and loses consciousness. He wakes up and forgets everything, his name, his parents and even that he is one of the biggest bullies at his school. Chase is determined to not be the person he once was.

Smile
A story about Raina who falls and injures her two front teeth this results in a long journey of braces, surgery, fake teeth and more.

Use this list of books for middle school reluctant readers to help your students find books they will enjoy reading.