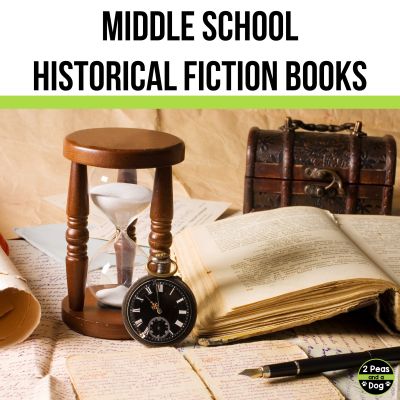 Middle school historical fiction books are popular amongst this age group. Students love to learn about the past in an engaging way (not just by reading a textbook). The year I did Refugee by Alan Gratz as a novel study with my Grade 7 students they learned so much about the time periods discussed in the book.

Allies
Four voices and stories come together to give a wide array of experiences during D-Day. The voices of the Allies and how they changed the fate of World War II are woven into an in-depth historical fiction novel for middle-grade readers.

Refugee
Alan Gratz weaves three different voices together in Refugee- Josef, a Jewish boy escaping the concentration camps in 1930s Nazi Germany; Isabel, a Cuban girl who sets out on a raft to America in 1994; and Mahmoud, a Syrian boy immigrating to Europe in 2015. Their lives are bound together in an ending the reader won’t see coming.

Prisoner B-3087
Yanek Gruener is a Polish boy snatched from his family and thrown into a concentration camp in Nazi Germany. This is a historical fiction novel based on the true story of Ruth and Jack Gruener, about a boy who survives living in ten concentration camps, against all odds.

Grenade
Another harrowing book of two different perspectives, Grenade follows two soldiers during World War II- this time set in Okinawa, an island off of Japan. Hideki and Ray are drafted into their respective armies and are fighting against each other until they actually meet, and their lives are changed forever.

When Michael O’Shaunessey is drafted into the Hitler Youth in Nazi Germany, he doesn’t tell anyone his secret – that he is actually a spy, along with his parents. Michael must act like a Hitler Youth, but that doesn’t mean he actually is one inside – and once he learns of Projekt 1065, he’s going to prove it.

Code of Honor
Kamran Smith’s brother is being called a terrorist, but Kamran knows better. He turns to some underground intelligence professionals, who must fight against the clock to clear his brother’s name and prevent another attack on America as big as 9/11.

Butterfly Yellow
Hang takes her brother Linh to the airport during the Vietnam War and puts him on a plane to America. Six years later, when Hang herself gets to Texas, she finally finds Linh with the help of LeeRoy, but must bridge the gap in Linh’s memories, since he doesn’t remember her or their life together in Vietnam.

Inside Out and Back Again

This novel in verse was inspired by author Thanhha Lai’s experience in immigrating to the United States after the Vietnam War. When Saigon falls, Ha must leave her beloved Vietnam with her family and start a new life.

Chains (The Seeds of America Trilogy)
Set during the Revolutionary War, Isabel and her sister Ruth were promised freedom and would no longer be enslaved. But when they become property to a cruel couple, Isabel realizes she must fight for everything and everyone she loves and not give in to the difficulties that lay ahead.

Fever 1793
It’s 1793 and a fever is sweeping Philadelphia. Mattie Cook’s family contracts the fever, and Mattie must leave in order to keep herself safe, but will she be able to when the fever is everywhere she runs?

These middle school historical fiction books are great for encouraging students to read more of this genre.