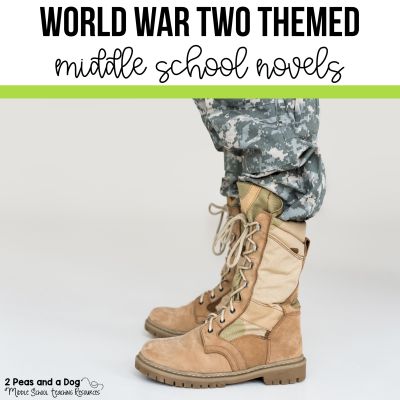 This is a list of teacher recommended World War Two themed novels for middle school students. These would be great additions to your classroom library or something to suggest your school librarian purchase. This blog post contains affiliate links which are of no cost to the reader. If you make a purchase through the provided links this blog will receive a small commission to help with the financial costs of maintaining the site.

The Diary of Anne Frank

Anne Frank and her family are forced into hiding during the Nazi occupation of Holland.  Anne keeps a diary and writes of her feelings and experiences during this time. Read the Common Sense Media review here.

The War That Saved My Life

Ada has a clubfoot and have been locked in a room by her mother.  During the war her brother is sent away for safety and Ada sneaks off with him. Read the Common Sense Media review here.

The story of a family and their ten-year-old daughter who help smuggle their Jewish friends to Sweden to escape the Nazis. Read the Common Sense Media review here.

Liesel Meminger lives outside of Munich in 1939 during Nazi Germany.  She steals books and shares them with her neighbours and the Jewish man hiding in the basement. Read the Common Sense Media review here.

The true story of twelve-year-old Jack Mandelbaum and how he survives in a Nazi-run concentration camp.

A story about a girl who is transported back to the time of the Holocaust. Read the Common Sense Media review here.

A fifteen-year-old boy from New York city uses fake ID to get into the US Air Force. On his last mission he is shot down, taken prisoner and sent to a German POW camp.

A story of how a twelve-year-old girl survived the Holocaust, as told by her niece.

Under a War Torn Sky

A pilot is shot down in enemy territory over France during World War II and needs to rely on the help of strangers as he moves at night trying to get home and back to safety.

The story of an eleven-year-old girl and her fight to survive against the Nazis.